I knew back in February when I couldn't run Black Cayon 100k that I would need to find a substitute race for my 2018 WSER qualifier. I also knew it would probably be a late Summer/early Fall race too which meant doing the thing I loath the most...training during the Arizona Summer. 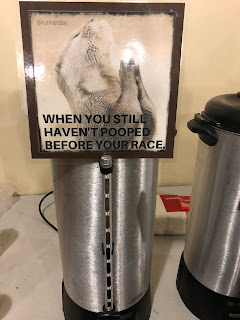 You'd think that the worst thing about summer training would be the heat, but you'd be wrong. Surprisingly, when I thought about this (yes, this is the stupid shit you think about on long runs), there is a pretty good list of heat-induced hell you have to train through.

So needless to say, I have never been happier to be done with training. A week prior to the race, we could see that the temperatures on race day would be significantly cooler. This was a blessing for sure but it represented a small hitch - all the heat training, clothing and gear we thought we'd need got tossed out the window given that the high temp would be 65 with lows in the mid-40's. It's not often you get perfect race days like this but it was a far cry from our summer of hellish heat.

Lining up for a race has never been so glorious. It was 48F and shorts, arm sleeves, a buff and t-shirt was all I'd need to kick off my day of running. I started with a bottle as well - which was strange given I'd trained the last 4 months with a pack. Jump ahead to mile 13 - it makes sense now that my arm was sore from carrying that bottle for 3+ hours :-) 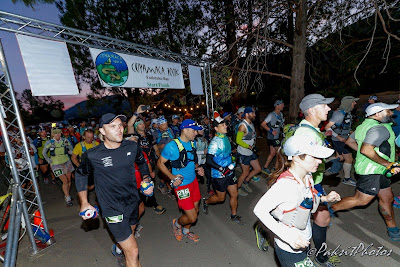 Dan and I ran together for quite a while - the cool temps and adrenaline of dusting off those taper-legs propelled me easily into the first aid station where Greg was waiting to take care of us and grab all the clothing we were shedding as the temp climbed to a paltry 55F. Somewhere between the first and second aid station, Dan would leave me behind. I thought he stopped and peed for the 5th time :-) and expected him to pop out behind me somewhere but I lost sight of him going uphill and never saw him again until after we both tagged Cuyamaca peak. The first 15 miles of the course is a great combination of single-track trail and service roads. You can tell that that service roads have been recently graded and I was very thankful for that! Between Merrigan and Green Valley aid stations, you have to decide whether you're going to run or hike...it's not steep but it is that gradual gentle grade that makes you earn every bit of the uphill.

A funny thing happened on the way up Cuyamaca peak. Tight neck and shoulders, constricted lungs, heavy chest and my stomach in knots

I had talked to a couple locals during the race who mentioned that coming down Cuyamaca Peak was probably the most technical (and difficult) part of the race. They weren't wrong. Large sections of boulders mixed with loose rocks and trenched out trail made for a pretty steep and cautious descent  down into Paso Picacho aid station. Half way down, I stopped to help a fella that had wiped out during his descent - he would be fine and continue on to finish. Little did I know that the encounter would foreshadow my own epic wipe out a few miles from the aid station. The irony is that I managed to navigate the hardest and most technical section of the downhill only to twist my ankle on the easiest section of trail I've ever seen. I managed to find the one rock on the trail...

As I crumpled to the ground yelling and grabbing my ankle (the same ankle I'd semi-sprained months ago), all I could think about was having to drop from this perfect race day and losing my Western States qualifier. I lay in the dirt for a while contemplating my next move when a couple other guys came down the trail and stopped to help. They helped me get off the ground and offered me some trekking poles or to stay with me until the next aid station (2 miles away). I graciously declined - mostly so I could wallow in my self-pity and stew about what I would do next. Thankfully, this part of the trail connects to the Paso Picacho campground which means the 'trail' turns into a well-groomed gravel section leading into the camp and aid station. Still tender and noticeably swelling, I attempted to run/walk for the last mile both testing it and attempting to build some confidence that despite the injury, I could make it 34 more miles. 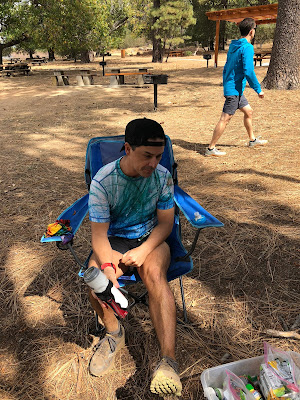 Arriving at Paso Picacho, Greg could tell that something was wrong. Covered in dirt still, he asked what happened and proceeded to immediately clean me off. Clearly despondent and struggling with my next steps, he never even offered up the notion of quitting or ending my race.

Ultra-running tip #126: NEVER let your immediate family crew you for an ultra-marathon.

They care too much about you and hate seeing you in pain. Experienced ultra-runners and/or coaches know enough to never even mention stopping or quitting unless there's a bone sticking out. As I continued to wallow, Greg was handing me food, refilling my pack and stuffing nutrition into my pockets clearly with the expectation that I was continuing on. It should be noted that some guy at the Paso aid station was making pickle sandwiches - a dill pickle cut in half lengthwise with ham, bacon and cheese in the middle. Literally a pickle sandwich - THE most amazing thing I've ever had in my life.

It's a little over 3 miles from this aid station to the start/finish where the first 50k loop ends. I resolved to take this 5k to see how the ankle would respond and then decide what to do next. Of course, not even 50 steps out of the aid station, I tried trotting down a short incline and landed on a rock that forced me to the ground again in pain. Swearing out loud, it was clear that my foot placement and speed would be impacted by my ankle but I continued on trying to make the best of it. I would finish the first loop in 7.5 hours.

Greg welcomed me back and again didn't let me get too down on myself or think about how much this next 50k would suck on a jacked-up ankle. I was still very much concerned about time and making the 17-hour cutoff given the amount of climbing and the potentially crippling cool temps that would appear after the sun went down.

I didn't get the chance to quit at this point with Greg continuously pushing my gear, nutrition, soda and food at me. Just get to the next aid station and see how it feels, he would say. So, off I went for loop 2 and another 12 miles.

I discovered several things during this loop:
It's not a very memorable loop other than the climb immediately after you leave the aid station. I would experience those altitude symptoms again but honestly, I could have just been tired. I'd return back the start/finish line again about 5:30 pm. 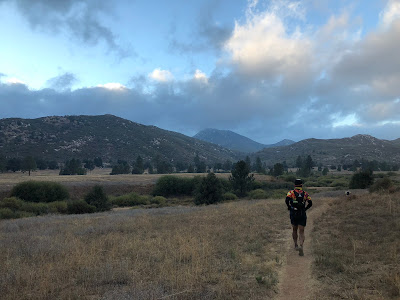 It this stage of the race, there was no turning back. You don't come this far in a race just to quit - even if you feel like it. So I changed into some dry clothes, grabbed my gear for the night, ate some food and took off with Greg for the final 18 miles. I was very much aware of the time at this point. I had taken about 30 minutes at the aid station meaning I had 6.5 hours to make it around this loop if I was going to get my qualifying time (17 hours was 11:30 pm). Doubt crept in realizing that the dark, cold temps and fickle state of my GI would likely cause some overall 'drag' in my pace.

As the dark settled on us, it was clear that keeping my headlamp on my head was not the right thing to do. These trails were dusty and largely monochromatic - meaning, they reflect light back so brightly that you're unable to see any surface features. Which is the worst possible scenario for someone nursing a bum ankle and trying to beat the clock. After a couple ankle turns, slips and bouts of swearing like a sailor, I decided to take my headlamp off and carry in down by my waist. Now that I could see shadows, we started moving forward at a reasonable pace with less swearing.

The climb up to Sunrise (aka, the Trump aid station) was not a hard climb but it was relentless and largely on the ridge line. The wind had picked up significantly and was pushing us along as we got to the aid station where a bunch of hot food was waiting for us. Nothing in my pack sounded good so I tried eating as much of the aid station food as I could. Noodles, chicken stew, pancakes and bacon sounded great but all I really wanted was soda and broth. We didn't stay long here knowing that time continued to work against us and there was a good stretch to the Pedro Flages aid station. Plus, they had Fox News blasting in the background :-)

The stretch between Sunrise and Pedro Flages was fairly easy to run - no large climbs or rocks but that wind! There were a couple times the gusts pushed us sideways nearly off the trail! Greg joked that if he were a couple pounds lighter, he'd have blown off the side of the mountain. LOL. The course eventually turns south into the finish which meant we were running head-first into it...talk about suck! The course gradually descends out of the wind but as I mentioned, the downhill was excruciating because of my knee. I would endure knowing that we were closing in on 5k to the finish. We were moving well still even though it was clear we were going to make the 17-hour qualifying time. I just wanted to be done.

With Greg's Dance Party Mix blaring above the wind, we would pass about half a dozen folks on the way into the finish. I sat down after  crossing the finish line after 16 hours and 9 minutes on my feet. 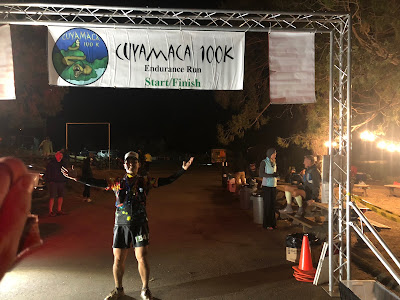 All things considered, I'm happy with the finish and qualifying time. It eats at me a little knowing that I could have done better if my ankle hadn't gone south but in the end, I'm grateful for the ability to do these things with the support of my family.

A big fist-bump to Dan for his awesome first 100k finish and for training with me through all the shitty Arizona heat. He got my ass out the door more days than I can count. Many thanks to Greg for his steadfast crewing, pacing and friendship. 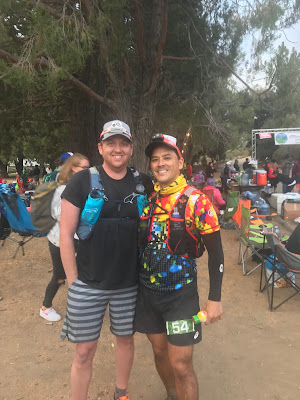 So now we wait until December - another Western States lottery entry to add to my tickets. Hopefully my next race report is from Squaw Valley.
Posted by TrevorD at 5:36 PM