For the third year in a row, I made the trek to South Dakota with my family to enjoy the hospitality of Ryan Phillips and Chris Stores, race directors for the Black Hills 100. Compared to the 100k last year, I've been able to apply my growing experience as a trail runner to the increasingly difficult race distances that take place on the Centennial Trail, starting in Sturgis, SD. I toed the line for the 100-mile race this weekend knowing full well what lay ahead – the climbing (16,000+ ft), variable trail and creek crossings would make for an interesting race through the Black Hills.

Just over 300 souls departed Woodle Field the morning of June 29th in search of their race goals. It’s very easy to get swept up in the pace of the 50 milers or 100k runners who often take advantage of the flat sidewalk prior to reaching the single-track trailhead at Fort Meade. I made sure to start in the hind-end of the pack to ensure I kept a slower pace early on.

The first 17 miles showcase all the attributes of the Centennial Trail you grow to love and hate over the course of your 100-mile journey:
Yes, there is some nice pine-covered trails scattered throughout but expecting this a majority of the time will just leave you disappointed. You can expect sweeping views of the Black Hills and the surrounding area but all that towering beauty is only a preview of what many call a “relentless” assault of elevation change.

The biggest challenge for me was dealing with wet feet after going 2-for-3 in crossing Elk Creek which was flowing nicely in several places. Admittedly, the cool water was a great relief for the low-80 degree temperatures and humidity but it makes for sloppy feet and one more reason I had to stop to change my socks at the Elk Creek aid station.

The day was going well as I passed through aid station after aid station…as always, the volunteers were great at filing packs and being very attentive to the needs of all the runners. At each drop bag location (Elk Creek, Dalton Lake and Silver City), I had barely gotten into the aid station and a volunteer would come walking over with my drop bag and a chair. This made it super-easy to coordinate shoe/sock changes, gear swaps and general logistics. It was equally as great when the volunteers would say, “Just leave it” (e.g., shoes, gear, etc) and somehow everything magically found its way back into my drop bags.

Approaching the turn-around in Silver City, the temperatures began to fall as the sun fell behind the pine tree-covered hills. The proximity to Pactola Lake also creates an additional layer of chilliness that was clearly evident as I sat down to take stock in my drop bag and pick up my friend and pacer, Aaron. Despite his jovial mood, I was slowly getting pissed off as I discovered more and more things I had forgotten to put in my drop bag…Garmin charger, gloves, extra socks and extra batteries just to name a few. I was coaching Aaron through a few things that I needed and he responded awesomely being his first time crewing or pacing. We left Silver City about 7 pm and no sooner than we starting our brutal climb out of the valley would I realize that my jacket and my arm warmers were still back in Silver City.

13 miles and forever later, Aaron and I would reach the Nemo aid station. Word to the wise for this course…LED headlamps with wide beams are useless at night because much of the trail is sandy, uniformly colored and shows no undulations making it almost impossible to run safely. You really need a hand-held torch or focused white-light that is bright enough to show all the variations in the trail. Because of my poor headlamp choice, we walked much of the Silver City to Pilot Knob trail and gingerly ran into the town of Nemo around midnight (5 hours to cover 13 miles!).

As I sat in the chair waiting for my bottles and pack to get filled, I fired off a text message to my wife letting her know where I was (Nemo is one of the few places with AT&T coverage). The chill in the air was just enough to ensure you didn't squat too long without a purpose. After a quick picture with Aaron and a pep-talk from ToddG, I was leaving Nemo and heading back to Dalton Lake to hopefully secure some warmer clothes. There was almost an incident with a skunk along the side of the road but thankfully he was more concerned about dodging a pickup than he was about me!

I could tell Dalton Lake was closing in because I could see my breath underneath the glow of my headlamp. I was looking forward to some warmer clothes and changing my shoes (again).

Oh, look. I didn't put any warm clothes in my Dalton Lake drop bag because they’re back in Silver City…

Thankfully, ToddG was kind enough to literally give me the shirt off his back as I was leaving Dalton Lake. It proved to be just the thing to get me through the next 12-13 miles where I would meet my next pacer (Philip) at Elk Creek.

Dawn was breaking as I pulled into the Elk Creek aid station. There was another guy sitting in a chair wrapped in a North Face jacket struggling with the manual dexterity required to open a packet of gel. It was clearly chilly but as we exchanged some chit-chat, he admitted to walking a majority of the 13 miles from Nemo and just couldn't keep his core temperature up.

“Have you seen a guy in a red bandana?” I asked the volunteers. “I should have a pacer meeting me” I elaborated. Nothing but shrugs. I had estimated being into Elk Creek around 3 am (it was now 5 am) and it seemed that Philip had either gone home or never shown up. Several of the ladies walked around looking in cars but couldn't find anyone fitting the description of him (whom I’d never met).

After gobbling up some chicken noodle soup (liquid gold!) and mixing my bottles with more Tailwind, I was resolved to continue on even if I didn't have a pacer so I put my head down and charged ahead trying to make sure I could cover the last 17 miles before the cut-off.

My legs felt pretty good but my feet were trashed. I could feel several large blisters on my mid-soles and a few more wrapping themselves around my pinky toes but you reach a point where it just doesn't matter any longer. You can’t stop them from being blisters. All you can do it live with it, adjust and keep moving forward. So I did.

In past races here at the Black Hills 100, I have loathed the seemingly infinite downhill stretch of fist-sized limestone blocks and shards (8-10% grade) that lead you into the Bulldog aid station. Not only are your quads screaming but your feet are ground up and throbbing. This year however, my experience on tough Arizona trails seemed to help me make short work of this stretch. Before long I was hanging out at the Bulldog aid station chatting with a very nice lady (the aid station fairy) about Arizona and how many more miles I had left. She also knew the exact right thing to say to me as I slouched back into the comfy chair drinking my cold soda.
“When I come over to take your cup, I’m kicking you out of my aid station.”

“Deal”, I told her. Sure enough, she physically pulled me up out of the chair and gave me a pretend kick in the ass.

About 2 miles after leaving the Bulldog aid station, I spotted a runner coming towards me…with a red bandana. Not shortly after I left Elk Creek did Philip check with the volunteers only to find out that I had come and gone. So he drove to the Alkali aid station and ran into the trail to find me. We laughed about the mix-up but I felt bad that he had waited the whole time and ended up having to do more work than a pacer really should. None-the-less, we navigated the rest of the distance, popped out from under the freeway and made our way into the Alkali aid station at about 9 am.

I literally ran through this aid station still fearing it might take me almost 2-3 hours to cover the remaining 5.7 miles to the finish line. There is a brutal climb that meets you head-on right after leaving Alkali…and never seems to end. I was swearing. I was cursing. Yes, I’d climbed it before, but not with 94 miles on my legs.

There is nothing nice about these last 6 miles. While there are some rolling hills, a majority of it is downhill along those same limestone-paved trails you went up 27 hours ago. My quads were mad at me but I was resolved and determined to be done. Philip was great at recognizing that I was zoned in and not in the mood for chatting. If the trail was going up, we walked. If the trail was going down (or flat) we were running.

Before long, the welcome sight of Fort Meade came into view and I crossed over onto the sidewalk for the final mile. Like the past two races here at the Black Hills 100, I could feel every tread on the bottom of my shoes as my feet pounded the sidewalk during those last 5,280 feet to the finish line.

I was shocked to come through the line at 10:20 am – a full hour and 40 minutes sooner than my 30 hour goal time. A tent full of finishers were sitting there at the finish line cheering me on and handing out those supportive pats on the back for securing my well-earned Black Hills 100 buckle.

Where was my family though? Because I got done sooner than expected, they showed up about 3 minutes after I came through the line (the irony is that in previous years, they've had to wait as long as 3 hours because of my poor pace estimation skills!)
I’m very happy with my overall performance. Tailwind continues to be my nutrition of choice and kept me fueled for the entire race. It also gives me some confidence heading into Leadville – well, at least for the climbing anyway :) According to the results, I was 34th overall (out of 64 finishers) and the 5th male in the 40-49 age group. Wahoo! 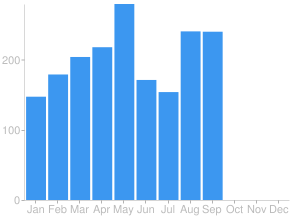